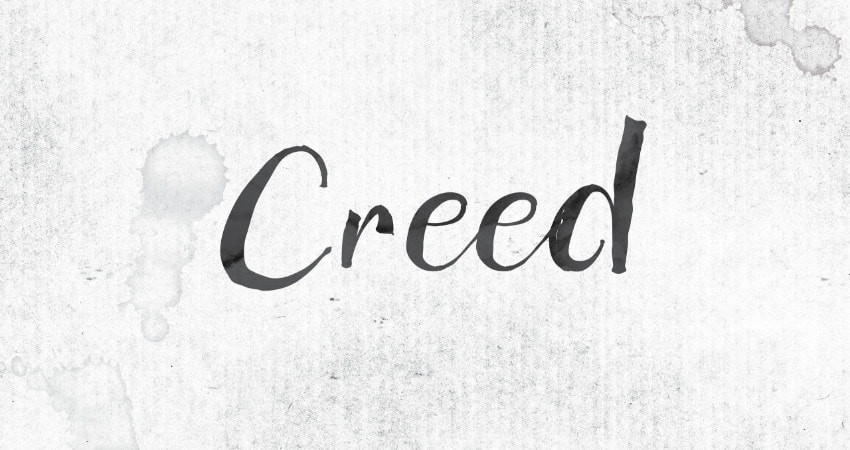 February starts a series we have titled “Creed” which walks through the elements of the Apostle’s Creed. Frank began the series talking through the first lines, which are “I believe in God the Father Almighty, maker of heaven and earth.”

If you would like to hear this sermon fully, you can listen on our Sermon’s Page, or watch the live stream recording on Facebook. Frank mentioned the song “Creed” by Rich Mullins.

A Creed is a formalized declaration/confession of faith and what we believe. These were especially important in the early days of the church because the written word was done by hand and not accessible to most people. Having memorable and portable condensed forms to 1) know what we as a community believe, and 2) protecting from false doctrine.

This is the big challenge for us. We so often mix and match our believes from such various sources, we don’t actually have a clear idea what it is we believe. This cobbled together theology acts like a spiritual goulash, so many of us have a hard time actually knowing what we believe. This is why the Creed is so important – it is a personal declaration of something we corporately believe.

“In God the Father Almighty”

God is our Father. This is not an aspect of gender. God is spirit and not male or female. This is about His nature of His relationship with us. It means we are in His family, that our inheritance and name come from Him. We are His children. He is King, so we are princes and princesses within His family.

“Maker of Heaven and Earth”

This is the first thing God tells us about Himself in scripture. This is something that people will often challenge because there are many implications for what this means. If God made the world, it means:

“He sits enthroned above the circle of the earth,
and its people are like grasshoppers.
He stretches out the heavens like a canopy,
and spreads them out like a tent to live in.

He brings princes to naught
and reduces the rulers of this world to nothing.
No sooner are they planted,
no sooner are they sown,
no sooner do they take root in the ground,
than he blows on them and they wither,
and a whirlwind sweeps them away like chaff.

“To whom will you compare me?
Or who is my equal?” says the Holy One.
Lift up your eyes and look to the heavens:
Who created all these?
He who brings out the starry host one by one
and calls forth each of them by name.
Because of his great power and mighty strength,
not one of them is missing.”